The Creative Power of the Mind

The following excerpt is from my forthcoming book, “Dreams of Light,” and it deals with the role of mind-altering drugs on the spiritual path. I’ve changed my tune on this. Before reading the books mentioned in this excerpt, I was more conservative, shying away from these agents. But these books changed my mind (the very title of Michael Pollan’s book mentioned below). Because of the tenets of neurophenomenology (which explores the neural correlates of personal experience), targeting the brain properly to induce new states of consciousness does have a place — if one is careful, and well prepared. The excerpt is from a chapter called, “The Creative Power of the Mind.”

Of all the wondrous creations of the mind, nothing is more magnificent and maleficent than the invention of ego. In a magical display of creativity, the mind makes something out of nothing. The sixth, seventh, and eighth consciousnesses pull the rabbit out of the empty hat of the clear-light mind, but that crafty critter then leaps out of the hands of the magician, and like all good rabbits instantly starts to procreate. This conceptual proliferation (in Sanskrit, prapanca) is the narrative that creates and sustains the illusion of ego. In other words, ego creatively patches together a disjointed series of mind-moments into the storyline called “me.” The flicker fusion that generates the sense of continuity we discussed earlier now works overtime to create our very sense of self.

Meditation is the most organic way to interrupt the narrative, but for some people, the judicious use of psychedelics can serve a similar purpose. “We have come to know these vivid, phantasmagoric experiences as altered states of consciousness,” says Kingsland, “but they tell us much more about everyday consciousness than we might care to admit. They are powerful demonstrations of the endlessly creative, virtual nature of everything we have ever thought, felt or perceived. Altered states are also providing invaluable tools for ‘re-tuning’ the mind . . . They have enormous untapped potential for humanity.[i]

In recent years psychedelic therapy has undergone a renaissance. Drugs such as psilocybin, LSD, and DMT (dimethyltryptamine “the spirit molecule,” the active ingredient in ayahuasca) are being used successfully to treat depression, addiction, anxiety, obsession, and fear of death. A mind-altering substance is also narrative-altering. Psychedelic agents can jolt the brain out of destructive and highly reified patterns—a prerequisite for making new and better narratives, or even ceasing all narratives. Michael Pollan, in his best-selling book How to Change Your Mind, writes,

Of all the phenomenological effects that people on psychedelics report, the dissolution of the ego seems to me by far the most important and therapeutic. . . It is this that gives us the mystical experiences, the death rehearsal process, the overview effect, the notion of a mental reboot, the making of new meanings, and the experience of awe. . . . Consider the case of the mystical experience: the sense of transcendence, sacredness, unitive consciousness, infinitude, and blissfulness people report can all be explained as what it can feel like to a mind when its sense of being, or having, a separate self is suddenly no more.[ii]

In Buddhist terms, psychedelics temporarily disrupt the creative (reifying) powers of the samsaric mind and can act as a form of pointing out transmission (see chapter XX, note XX [[In Tibetan Buddhism, a seminal event called “pointing out transmission,”]]). They can point out what it’s like when our samsaric creator goes offline, and that glimpse can then be stabilized into a gaze with meditation. Technically, it’s more of a pointing in transmission, of what it’s like to see the world free of the ego, from a deeper perspective within. The psychologist Matthew Johnson suggests that psychedelics “dope-slap people out of their story. It’s literally a reboot of the system—a biological control-alt-delete. Psychedelics open a window of mental flexibility in which people can let go of the mental models we use to organize [reify] reality.”[iii]

LSD, appropriately called acid, dissolves the sense of self, which simultaneously liquefies the sense of other. In chemical terms, a solution is a homogenous mixture of two or more substances; in spiritual terms, the mixture of self and other fashions a solution—one that solves the problem of reification, and therefore of duality. Petrified perceptions of self and other melt with the acid, and what remains is the ultimate solution: the disembodied or formless awareness we discussed in chapter 8

I’ve only experimented with psychedelics a few times. My first experience with LSD was not so much life transforming as it was meditation confirming. After I ingested the “solvent” I felt momentary panic as it started to dissolve my sense of self, but I quickly surrendered to the dissolution. I was willing to lose my mind in order to find reality. A cascade of unforgettable experiences ensued, including listening to Bartok string quartets and fully becoming the music; watching golf on TV and laughing hysterically at the solemnity and absurdity of chasing a tiny white ball around infinite pastures; looking at my face in the mirror as it dripped like a Salvador Dali painting.

But two moments of the LSD experience stood out. At the height of the trip, I went to my shrine room and sat down to meditate. It immediately seemed redundant. I was already in some sort of meditation, and sitting down to meditate did nothing. My usual meditation boycotted the narrative of “me,” and brought me to my senses. The acid had already melted that narrative.[iv] The result was a deeply sensual experience free of any mental static.

The second experience occurred when the drug was wearing off, eight hours after its onset. I had been studying the teachings on the eight consciousnesses in those years, and as my trip started to end I could feel the narratives of the sixth and seventh consciousnesses reestablishing their storylines, and therefore reestablishing me. While fascinating, it was mostly very uncomfortable. Like being sent back to prison. For the previous eight hours I had bathed in space, relating to everything with open equanimity. As the acid began to wear off, I could feel the contractions begin, along with the painful birthing of self and other. From the high of selflessness came the miserable crash into self, a visceral and cognitive thud back into my old form.

The trip reinforced my confidence in meditation, which delivers me to similar heights through natural means. Meditation and medication both have the power to “shake the snow globe,” and let the flakes settle in fresh patterns more aligned to truth.

This rendering of the creative power of the mind takes on even more impetus and immediacy when we discover that perception altogether is creation—the topic of our final chapters.

[i] Kingsland, Am I Dreaming?, 14. From an absolute perspective, normal dualistic consciousness is the altered state. Psychedelics give us a glimpse of the original state. In Dream Yoga, I was hesitant to endorse psychedelics (from the Greek, meaning “mind manifesting”; also referred to as entheogens, “creating the divine within”) but I have since changed my view. With the proper motivation, and with healthy “set and setting,” these agents target the neural correlates to phenomenological states that can open the mind, pointing out the divinity within.

[ii] Michael Pollan, How to Change Your Mind: What the New Science of Psychedelics Teaches Us About Consciousness, Dying, Addiction, Depression, and Transcendence (New York: Penguin, 2018), 389.

[iv] One study focusing on ayahuasca determined that after the hallucinogenic effects of the drug have worn off, mindfulness is temporarily elevated to levels normally seen in practitioners who have been meditating seven years or so. See Joaquim Soler et al., “Exploring the therapeutic potential of ayahuasca: acute intake increases mindfulness-related capacities,” Psychopharmacology 233 (5): 823–829. 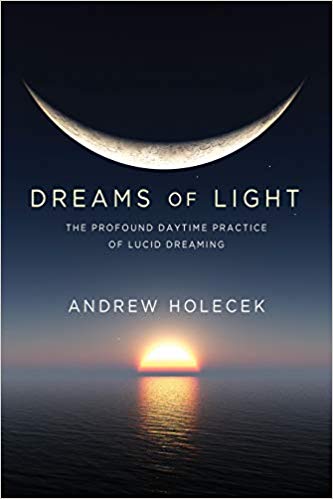 Dreams of Light: The Profound Daytime Practice of Lucid Dreaming

With Dreams of Light, a world-renowned expert in lucid dreaming and Tibetan dream yoga guides us into the tradition’s daytime practices

Most of us are absolutely certain that we’re awake here and now―it’s a given, right? Yet, according to Tibetan dream yoga, ordinary waking life is in fact a delusion, as illusory as our nightly dreams. Read more.